“For me, being a CRNA means I become our patients’ voice. When they go to sleep, they cannot speak for themselves,” said Josephine Low, CRNA, who has worked with the Memphis anesthesia practice for nearly six years. “CRNA are the patients’ eyes and ears.”

“We are the patient advocate,” said Deidre Leeper, CRNA, “We are with the patient throughout the whole perioperative process. We have met the family. We know the full scope of medical history. We are focused directly on the patient, so we see and respond to changes immediately,” she said. “It is a life-giving career.”

“Historically, nurses have been a unique and special part of a medical team because we provide compassion and our bedside manner is often more nurturing,” said Jenny Williams, CRNA, Co-Chief CRNA. “After four years as an ICU nurse, I became a CRNA because I wanted more challenging, complex responsibilities,” she said.

Low also worked as a nurse—ICU transplant and then cardiac surgery—before becoming a CRNA. “In my 32-year career, anesthesia was something I always wanted to do,” she said. Both Williams and Low have been at the Memphis practice, specifically the main Baptist site, for the duration of their careers. “I was literally born at this hospital!” said Williams. “You can check my birth certificate.”

For Leeper, this team is new. As a 2017 CRNA graduate, her role in Memphis is the second anesthesia team she’s been on.

Leeper joined the Memphis group for two reasons: “When I started with this team, American Anesthesiology of Memphis really listened to my interests and has helped me be successful in finding my niche,” she said. More importantly, she felt the Memphis group was a place where she could advance her skills.

“Our entire team—CRNAs and anesthesiologists—has a strong, collaborative relationship,” she said. “I appreciate the autonomy and the ability to work at the top of my license. And if I come across something I want to do, or learn, our doctors are happy to walk me through it and help me grow.”

“We really work well together,” said Low. “We are often paired with the same surgeons who trust us because they are confident in our abilities. Our surgeons feel at ease to do what they do best because they know we know how to see a patient successfully through surgery.”

The greatness of leadership 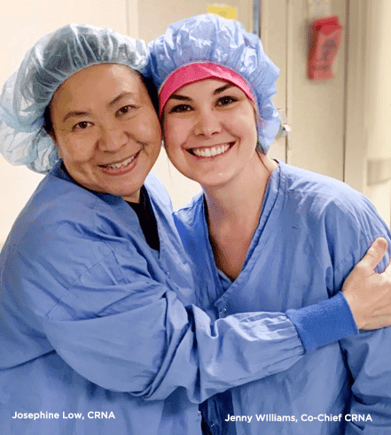 Williams sees less of the OR these days since assuming the vital role of board runner for her team. “To be honest, I’m more like a glorified dispatcher,” she quipped, but it’s so much more than that. After successfully organizing the student program schedule, “Our medical director saw my talent and flexibility of improving the process and asked if I was interested in taking on a greater role,” said Williams. As board runner, she tactically coordinates a team of nearly 30 anesthesiologists and more than 60 CRNAs across three full-service hospitals and six ASCs, with an average of 120 cases a day.

Day one at the board, October 15, 2018: “It was unlike anything I had ever done,” she said. “It was the most stressful day I can remember.” But Williams learned, and more importantly, she helped achieve real results. “It’s rewarding to know all the strategy I put into it made a difference,” she said. “I soon learned October 2018 was the most productive month since 2015. Our efforts increased production at the hospital. Turnover improved, efficiency improved, and we’ve made this hospital a place where surgeons want to come,” said Williams. 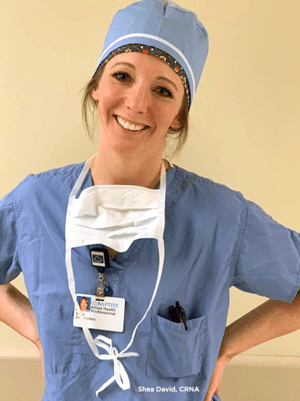 At the Memphis group, CRNAs provide patient care, and they are also an active part of quality improvement. For the team’s ERAS program, Troy Christopher, CRNA, and Shea David, CRNA, were important to the program’s development and leadership. “It was rewarding to see patient outcomes improve directly after the ERAS implementation,” said David. “I feel fortunate to be part of an amazing team that encourages and nurtures the enthusiasm necessary to provide the highest standard of care for our patients.”

The ERAS program delivered such tremendous quality results and decreased hospitals stays over the past year that it is being expanded to open heart and cardiothoracic care. “Experiences such as implementing one of the nation’s first cardiovascular ERAS protocols is the reason why I joined this practice,” said Christopher. “Our leadership provides the support and tools to successfully undertake such an endeavor.”

In late 2019, American Anesthesiology began rolling out its new market leadership to bring greater empowerment back to the practices and regions. Part of this effort includes a CRNA from American Anesthesiology of Tennessee—Kevin Smith, CRNA—who has assumed the role of Vice President for Advance Practice Anesthesia (APA) and will work alongside four regional APA Directors. “My team in Memphis helped shape my career, not just as a CRNA but as a leader. I am actively traveling to our practices to get to know our anesthesia teams. I am not just there to listen, but to provide the full attention, support and voice that our profession demands.”