Dr. Richard Porreco Retires: MD4MOMS Hangs Up the Stethoscope After 50 Years of Practice

The license plate on maternal-fetal medicine (MFM) specialist Richard Porreco’s car says “MD4MOMS,” and he’s been living up to that moniker for decades. Now, after dedicating his life to caring for mothers and babies, he’s retiring from the practice he built.

Passionate about the scholarly side of MFM, Dr. Porreco has made nearly 100 contributions to medical literature, reflecting interests ranging from prenatal diagnosis to the role of cesarean delivery in modern obstetrics. His interest in research, publishing and education is something that’s benefitted his patients—and his colleagues.

“I basically learned everything about MFM from Rich,” explained Rebecca Barkey, MSN, PNNP, a perinatal nurse practitioner with Obstetrix Medical Group of Colorado. “He was a mentor for me in my early days as a nurse practitioner and was very invested in the education of providers in his entire practice. Those who have worked with Rich will say that we learn something new from every interaction with him.”

During his time in a white coat, Dr. Porreco has seen the advent of ultrasound, which he says significantly improved the ability to diagnose prenatal conditions. Electronic medical records also revolutionized the practice of medicine. He draws from his years of knowledge to explain complex topics in more practical, understandable ways. This trait, said Barkey, instills confidence in clinicians to provide excellent patient care.

“I’ve enjoyed doing what I do. I look forward to getting up in the morning and going into the office. And I’ve been pretty good at it,” Dr. Porreco said with a chuckle.

Don't have time to read? Listen to the blog here!

Colorado roots have kept him grounded

While he is board-certified in OB/GYN, MFM and Medical Genetics, he didn’t consider a career in medicine until well into his 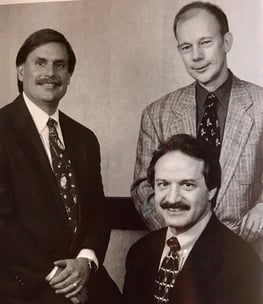 After residency, Dr. Porreco completed a fellowship in maternal-fetal medicine and genetics at the University of California, San Diego. While in San Diego, he served on active duty in the U.S. Navy, running a high-risk OB/GYN service at a naval hospital before returning to Colorado in 1981. He formed his solo practice that same year.

Dr. Porreco served at the helm of the practice from its inception until 2014, when he turned medical director duties over to MFM specialist Robert Stettler, M.D. The practice joined Obstetrix in March 1998 to tap into the company’s business expertise and efficiencies.

“During all these years, Rich has assembled a group of physicians that are second to none,” said Dr. Stettler. “He has been an exceptional mentor and great friend to each of us. His care, dedication and desire to achieve the highest levels of patient care are unsurpassed and serve as a constant reminder to us—the partners—of how things should be done.”

Teamwork that works both ways

Dr. Porreco says one of the keys to his success and longevity is that he makes sure that everyone on the team has a voice. By employing a collaborative approach to care, each team member is engaged and less likely to get burned out.

“I’ve recruited a lot of younger colleagues and I never say, ‘You must do it this way’,” he explained. “I give my rationale on how the quality of care can be improved and support clinicians’ professional development.”

One of the team’s most important members are nurses, who he says are “a joy to work with” and hold the “power vortex” in the hierarchy of the clinical team.

“Rich understands that the staff nurses are the eyes and ears for his patients, and he empowers nurses to take excellent care of patients,” Barkey said.

In the late 1980s, when St. Luke’s lost its residency program and the MFM service needed help on the labor and delivery unit, Dr. Porreco thought to staff the unit with advanced practice nurses who specialized in high-risk obstetrics, according to Barkey. So, along with a former colleague, he reached out to Regis University to develop the perinatal nurse practitioner (PNNP) graduate program.

“The PNNP role that Rich initiated is unique, even within Mednax,” she explained.

In recent years, Dr. Porreco stopped taking night call and scaled back his hours to part time to avoid some of the physical demands of clinical work. While he officially “retires” on June 30, he’s still on the schedule per diem through August. He’ll also wrap up a study about the management of preterm rupture of membranes, for which he’s the principal investigator. He’s also the medical monitor for a study regarding a blood test to screen for preterm birth.

His wife Terese, a radiologist specializing in breast cancer, is also retiring, but not before she travels to a few professional speaking engagements—which Dr. Porreco plans to attend as well. Then, the grandparents of five will move full-time to their home in Steamboat Springs. Avid road cyclists who have traveled to New Zealand, Spain, Italy and beyond on bike, the Porreco’s have a cycling trip to Crater Lake, Ore., on the horizon. And while R&R may be on their agenda, so is continuing to embody the best of Colorado living through their shared love of downhill skiing, snowshoeing and hiking.

A legacy not soon forgotten

Dr. Porreco is past president of the medical staff at Presbyterian/St. Luke’s Medical Center, the Colorado OB/GYN Society and the Denver Clinical and Pathological Society. For more than 30 years, he co-directed Mednax’s renowned Steamboat Perinatal Conference. But for Dr. Porreco’s peers, those accomplishments are overshadowed by the bedside care he performed day in and day out.

“Rich’s dedication to moms and babies is his legacy,” said Barkey. “He has demonstrated this dedication over and over with clinical work, research and outreach.”

Dr. Stettler echoes that sentiment: “Dr. Porreco probably leaves a number of legacies, but I think he would be most proud of the thousands of moms and babies that he helped get through difficult pregnancies. He has dedicated his life to helping mothers navigate one of the most difficult times of their lives. I particularly will miss his knowledge, compassion and ever-present willingness to help out with a problem, whether it involves patient care or the administrative duties of the practice.”

As he reflects on his 50 years in medicine, Dr. Porreco’s thoughts are simple. “I hope that my legacy is that I’ve made an impact by example,” he said. “I’d be satisfied with that.”

We thank Dr. Porreco for his contributions and wish him the very best in his retirement. Visit our For Clinicians page to learn more about how Mednax has perfected a system of support that allows clinicians to spend less time behind a desk and more time pursuing their passions—both personal and professional.