Charlotte Galle was born with a congenital heart defect called patent ductus arteriosus (PDA), an unclosed extra vessel from the aorta to the pulmonary artery. While every baby is born with a ductus arteriosus, the opening is no longer needed after birth and usually narrows and closes on its own within the first few days of life. For some babies, the ductus arteriosus remains open (patent), causing abnormal blood flow between two of the major arteries connected to the heart. 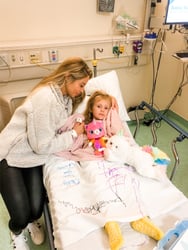 This can put a strain on the heart and increase blood pressure in the lung arteries. PDA occurs more often in premature infants but can also affect full-term infants like Charlotte—on average, it happens in about 2 of every 1,000 births and is twice as common in girls as boys.

PDA is typically suspected during a regular checkup upon hearing a continuous heart murmur while listening to the child’s heart through a stethoscope. An echocardiography test is then performed to confirm the defect. Following Charlotte’s diagnosis shortly after she was born, she began to receive regular cardiology care, which consisted of follow-ups every six months to a year. When her parents met Casilda Hermo, M.D., pediatric cardiologist and practice medical director at Pediatrix affiliate Children’s Hearts Pediatric Cardiology in Nashville, Tenn., they were thrilled to learn of a non-surgical treatment option.

“Honestly, it was by the grace of God that she took over the practice,” said mom Katie Galle. 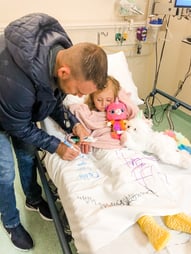 Without a long-term solution in place, 4-year-old Charlotte would have to continue cardiology follow-ups indefinitely to ensure the pressure in her lungs was not increasing while also being at increased risk for bacterial endocarditis, an infection caused by bacteria that enter the bloodstream and settle in the heart lining, a heart valve or a blood vessel. When she transitioned to Dr. Hermo’s care, Katie said, “We went and saw her immediately and just fell in love because how could you not—she’s amazing and so personable.” Dr. Hermo instantly recommended Charlotte undergo a cardiac catheterization procedure to close the vessel. “It was a little nerve-wracking, but it was without hesitation and with pure confidence that she said this is exactly what it is, this is where it’s at in the heart and this is an easy procedure that could be taken care of—and needs to be taken care of—very quickly.”

Following her first visit with Dr. Hermo in November 2019, Charlotte was referred to a pediatric cardiac interventionist. Just three

months later, in February 2020, she underwent a transcatheter PDA closure. The minimally invasive procedure consists of inserting a catheter into the femoral vein in the groin and guiding it to the heart using X-ray imaging to locate the PDA. A closure device made of metal and mesh is then inserted through the catheter and into the PDA, acting as a plug. Once in place, the device blocks the vessel and stops blood from flowing into the lungs. The PDA closure device remains permanently implanted in the heart, and the body’s natural healing process covers the device with tissue.

The procedure was a success. In August, Charlotte had her final appointment with Dr. Hermo and was cleared—she will no longer require cardiac care. “Within just a few months from the time we initially saw her to the time that she referred us, it was done and taken care of—super easy, amazing recovery. And then we had her six-month follow-up just a few months ago and she’s perfect—she healed perfectly,” said Katie.

Risk factors for having a PDA include family history and other genetic conditions. For the Galle family, heart issues are not new. Charlotte’s father, Billy, also has a heart condition that required open-heart surgery six years ago. When Charlotte began to see Dr. Hermo, Katie and Billy decided to err on the side of caution and have her older brother, Beckham, examined. He had previously been cleared of any congenital heart defects when he was an infant, but Dr. Hermo determined that he has partially fused leaflets of the aortic valve, a condition like his father’s, and will undergo further testing under Dr. Hermo’s care. “Had it not been for her, we would have never known” said Katie. “It’s been a crazy journey, but it’s also been a journey where I’m so unbelievably blessed and grateful for the opportunity to have such an incredible doctor like Dr. Hermo.”

Learn more about our comprehensive scope of pediatric solutions.