In honor of his decades of dedication to research and clinical practice in the field of neonatology, Dr. Reese H. Clark was inducted into the Legends of Neonatology Hall of Fame during the 2019 NEO: The conference for neonatology  held in Orlando, Florida. The Hall of Fame was established to celebrate the remarkable individuals — the “legends” — whose clinical contributions have helped forge new ground in neonatal medicine. 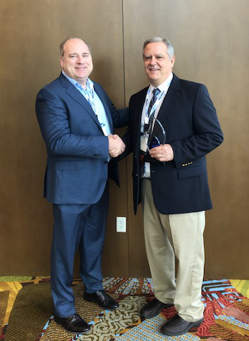 Dr. Clark joined MEDNAX in 1998 as Director of Research. In 2014, he was promoted to Vice President of Clinical Research, leading initiatives within the MEDNAX Center for Research, Education, Quality and Safety.

“The Legends of Neonatology Award recognizes an extraordinary clinician who has dedicated his or her life to improving the care and outcomes of our smallest patients,” said Dr. Timothy Biela, NEO Conference co-director alongside Dr. Clark. 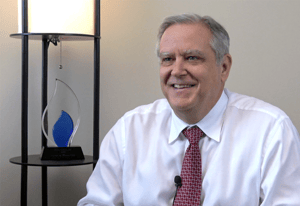 Dr. Clark is a leading clinical researcher for the care of critically ill newborns. In addition to his role at MEDNAX, he also serves as a Consulting Associate Professor at Duke University in Durham, North Carolina, and a Clinical Professor of Pediatrics at the University of South Carolina School of Medicine in Charleston, South Carolina.

“Dr. Reese Clark exemplifies what it means to be a ‘legend’,” said Dr. Biela, who is also a neonatologist in San Antonio. “He has dedicated over 30 years of his life to this field to improve the quality of care we administer to our neonates. He is constantly challenging both himself and his colleagues to always improve, and to never settle for status quo. Reese has also mentored numerous physicians, helping them advance as practitioners of this field, and in my opinion, making them better people as well.”

Prior to joining MEDNAX, Dr. Clark served as the medical director of the Extracorporeal Membrane Oxygenation (ECMO) Program at Atlanta’s Emory University School of Medicine. He has published over 200 original papers and five chapters in neonatal texts and presented his work at over 150 national and international conferences. Additionally, Dr. Clark is a journal reviewer for six publications.

Dr. Clark’s success as a leader in clinical research has been recognized by his FDA appointment as an advisor to the Anesthesiology and Respiratory Therapy Devices Panel of the Medical Devices Committee. He was elected by the membership of the Extracorporeal Life Support Organization to chair the committee that develops new clinical studies involving ECMO. He is also a Member of the Society of Pediatric Research and The American Pediatric Society.

“My father always said, ‘Don’t be proud, be thankful,’” said Dr. Clark, when asked about his achievement. “Because the truth of the matter is, this award really represents the contributions of all the people I’ve worked with across my career — the people who show up, volunteer, participate and provide excellent care to our patients. Nothing is done by one individual. I’m very honored and proud to have received this award, but I’m more thankful for the people who have helped me achieve the things that we’ve achieved within MEDNAX.”

Dr. Reese H. Clark is board certified in pediatrics and neonatal medicine. He earned his medical degree from the University of North Carolina at Chapel Hill and completed his pediatric residency and neonatal fellowship at Wilford Hall United States Air Forces Medical Center.

The NEO Conference is an annual continuing education experience MEDNAX hosts for current practicing neonatal medicine providers and those still in training.