Smaller than a Barbie doll, larger than life

One pound. That’s about how much a bag of disposable diapers or a loaf of bread weighs. Remove a handful of diapers from the bag or a few slices from the loaf of bread, and you have about 11.5 ounces.

Leading up to his preterm delivery, Jari’s mom, Amber Higgins, was being closely monitored because Jari wasn’t growing well in the womb, and doctors feared there could be a placenta issue. A few days before Jari was born, Amber was admitted to the hospital with preeclampsia and fetal-growth-restriction concerns. She was given steroids to help Jari’s lungs develop more quickly, and they continued to monitor Amber and her unborn baby.

“Early in my pregnancy, everything pointed to a healthy pregnancy and a routine birth,” said Amber. “At my 20-week ultrasound, I was told my baby seemed very small, so they sent me to a specialist. I don’t think I really understood the seriousness of the situation. When I was admitted to the hospital at 23-and-a-half weeks gestation, it wasn’t until doctors talked to me about Jari’s survival rate being 30% that I realized we had a serious problem.”

After a couple of days in the hospital, Amber’s preeclampsia was worsening and the baby wasn’t growing well, so a decision was made to deliver Jari via c-section.

“At that time, I thought the baby weighed around 350 grams (12.3 ounces),” said Jennifer Anderson, M.D., a neonatologist at Presbyterian Hospital in Albuquerque and practice medical director for Pediatrix® Medical Group of New Mexico. “It’s a very tough decision for obstetricians to make about whether to deliver a baby this small. You have to weigh the risks for both mom and baby of trying to keep the pregnancy going or delivering an extremely preterm baby.”

Dr. Anderson and the care team knew the baby would be tiny and that his size could come with many challenges. Therefore, an entire team of specialists was standing by, each with specific roles, to assist once Jari was delivered.

“Naturally, we were a little concerned, but we knew Amber and the baby were both at risk if we didn’t deliver him soon,” said Dr. Anderson. “We gathered the care team, and a short time later, he was born.”

Jari’s immature lungs were a primary focus. Once he was delivered, the team went to work. They placed him on the warming table and quickly assessed him to determine his immediate medical needs.

“Once he was stable, I let his parents know that because he was so tiny, it was going to be a long road and I wasn’t sure he would make it,” said Dr. Anderson. “If he did make it, he would be the smallest survivor in our NICU, and just like every patient, we were going to give him the support he needed to try to get him through this.”

The first couple of weeks were a bit trying with some lung-management issues. But once he reached two weeks, for the most part, Jari seemed to sail through his 127-day stay in the NICU with very few problems. By the time he was a little more than a month old, he no longer needed a breathing tube, and he was up to full feeds.

“The NICU team was great,” said Amber. “Jari’s dad, Julian Lopez, and I were able to choose four specific nurses — two during the day and two at night — who would care for Jari during his entire stay. They knew exactly what he needed, when he needed it, which was very comforting.”

Before leaving the NICU, Jari would need surgery to repair two large inguinal hernias. Aside from that, on June 29, four-and-a-half months after he was born, Jari finally got to go home. He was 42.1 weeks gestation and weighed 2,515 grams, or 5 pounds, 9 ounces. He was sent home with a small amount of oxygen due to the altitude in New Mexico, and he would continue taking a multivitamin. Amazingly, that’s all he needed from a medical perspective.

“The NICU staff had a parade for Jari on his last day,” said Amber. “All the great medical professionals who got us to this point were there to cheer him on and wish us well. It was a joyous, tearful experience.” 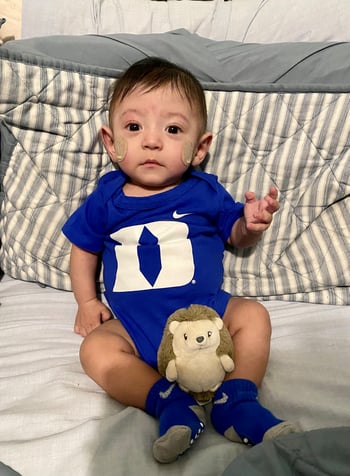 Jari joins numerous other surviving micro-preemies (those born weighing less than 400 grams). Worldwide, 286 babies meet the micro-preemie criteria, according to The Tiniest BabiesTM registry published by the University of Iowa, and the list is growing. Last year, a record was set when the smallest surviving baby in the world was born in Singapore. The baby girl weighed 212 grams (7.48 ounces). After a 13-month stay in the NICU, she was discharged from the hospital.

These micro-preemies are a testament to the strides that have been made in medicine and the care teams’ ability to innovate and improvise when caring for extremely premature babies.
Today, 9-month-old Jari is nearly 11 pounds and continues to grow and develop. He is being weaned off the lowest oxygen level, and he is happy, healthy and ready to take on the world.

Check out our other related articles in honor of Prematurity Awareness Month:

Like mother, like daughter: A Christmas gift that spans decades
Leading the way for advancements in neonatal care
Caring for NICU babies: It takes a village
Five ways Graham’s Foundation provides support for premature infants
NNP cares for babies in the NICU, while the NICU cares for her preemies