Central lines are the most common cause of hospital-acquired infection in the neonatal intensive care unit (NICU). Central-lined associated bloodstream infections, known as CLABSIs, have a significant impact on patient outcomes, including the length of stay, complications, and even survival.

With such high stakes, it makes sense for NICU teams to put a plan in place to minimize CLABSI. Under the leadership of Medical Director Dr. Bruce Jenkins, Pediatrix Medical Group of Tennessee implemented a quality improvement program that was so successful that on July 4, 2020, they celebrated nine years without a CLABSI. 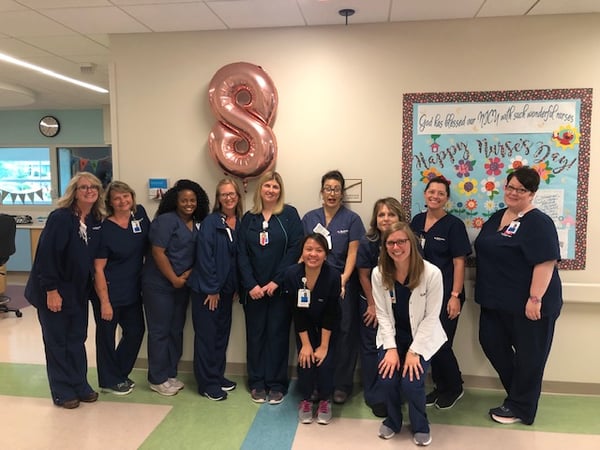 The cost of CLABSI

In 2010, the NICU at Methodist Le Bonheur Germantown Hospital, a suburb of Memphis, TN, transitioned from an open concept NICU to four-bed pods. Within a month, they experienced an uptick in central-line associated bloodstream infections. Although the hospital’s incidence of CLABSIs was still low compared to national averages, the recent cluster concerned them.

Reducing central line infections was an area of focus of Pediatrix’s 100,000 Babies Campaign, a large-scale quality improvement initiative that was launched just a few years prior. The Memphis practice was able to tap into established toolkits, while also customizing an approach that worked best for their unit.

Elizabeth Ivey, NNP, explained the challenges inherent in pinpointing one root cause of CLABSI and how they approached the issue from a variety of angles. The multi-faceted approach included team efforts to:

“The initiative required commitment from the entire team – physicians, nurses, nurse practitioners, medical staff,” said Ivey. “All levels of care needed to agree, and we were fortunate that everyone felt the responsibility of improving outcomes for the babies.”

When Ann Barron, Patient Care Coordinator, transferred to the Germantown NICU from another nursery, she was immediately impressed with the amount of pride the unit had in the project and the results. “Having a second RN at the bedside has become part of our every-day best practice. The accountability is there to ensure the guidelines are followed and is a major reason the change has worked.”

The role of documentation

The team was confident in its improvement plan but wanted to be certain that the full clinical picture was begin represented precisely and accurately. “The clinical team doesn’t rely on a positive blood culture alone to reach a CLABSI diagnosis,” Ivey explained. “In addition to lab results, it’s necessary to review clinical notes to ensure that the infection is caused by a central line.” A CLABSI is diagnosed if no other infection source is identified when a central line is in place or within 48 hours of its removal. The practice captures clinical notes in an electronic health record module, BabySteps, developed by Pediatrix, specifically for the NICU. It gives them the ability to document the care they provide by capturing a consistent set of information about their patients. This digital documentation of care is de-identified and stored in a secure database, called the Clinical Data Warehouse (CDW), where patient information is used to assess treatment outcomes.

“We understood the importance of our documentation as the best representation of a thorough clinical portrayal of the patient and became better stewards of the data,” Ivey explains. “Thorough notes about what we observed and our thought process helped make the review of the data more meaningful.” Their documentation efforts helped them rule out CLABSI with confidence.

Nine years without a central-line infection is a tremendous achievement. The team plans to remain vigilant to continue the trend. If you’d like to learn more about reducing CLABSI infections, get more information, and sign up for our blog for more safety-based publications.