It's rare to hear of colleagues donating their organs to save the life of the other. But in the world of health care, where you spend long, sometimes trying, hours together, a special connection is formed and co-workers become your second family.

In this case, it’s not the story of one organ donation, but two(!). We're humbled by two of our clinicians who went above and beyond for a colleague and a former colleague’s spouse, both of whom suffered from polycystic kidney disease—an inherited disorder in which clusters of cysts develop in the kidneys, leading to gradual loss of kidney function—and were in the end stage of renal failure. In desperate need of organ donors, Vicki Herman, NNP, and Karen Crane, MA, stepped up to give the gift of life.

Can't find time to read? Listen to the blog here!

Vicki Herman, NNP, and Amber Cooper, RN, BSN, met about five years ago when they worked together in the neonatal intensive care unit at TriStar Horizon Medical Center in Dickson, Tenn. Over the years, they developed a close bond, and Amber shared that her husband, Andrew, would one day require a kidney transplant. Without hesitation, Vicki offered to help however she could. 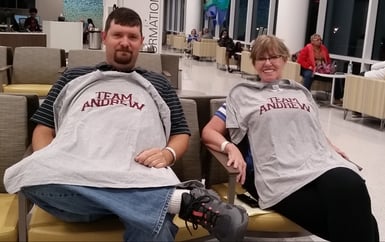 Fast forward about a year later, in May 2019, when Amber posted an urgent plea for donor volunteers on Facebook. At that point, the Coopers had gone through three failed donor attempts with family members. Vicki felt called to make good on her word and initiated the testing process. About a month later, right around Andrew’s 40th birthday on June 28, they learned that she was a match. It was such a close match—they have the same blood type, and their tissues were a complete match as well—that the surgeon said they would have anticipated it to be a family member. Just two months later, to the day, Andrew and Vicki went in for surgery on August 28, a few days after Vicki celebrated her 60th birthday.

“It went very quickly from us finding out she was a match to the day of the transplant within two months, which was pretty dramatic, and I attribute all of that to Vicki,” said Amber. “She was determined, and she kept on them and did whatever she needed to do to provide the documentation. There’s a lot of testing that has to be done, and she really pushed that process.” Ironically, Andrew’s father received a kidney donation when he was 60 years old from his only son that didn’t inherit the disease, who was 40 at the time.

Now nearly two years after the transplant, Andrew enjoys an improved quality of life, specifically a renewed energy that allows him to keep up with his five-year-old son.

“For Vicki to do what she did, it’s a miracle,” he said. “My life now is so much better. I can actually go and do things for extended periods of time, more so than I have in a long time. It came to the end, and Vicki saved my life and helped my family tremendously by doing what she did.”

As Vicki reflects on the experience, she stresses that she never thought twice about it.

“If I could go back, I would still do it all over again,” she said. “I don’t think I could have ever picked such a well-deserving, honest human being. That's my reward back—seeing Andrew feeling better and doing things with his son and his family. There was really no option other than to get it done if at all possible. I love Amber as well—she’s one of the most important people that I'd ever worked with at Horizon. We need to do things for fellow mankind. Whether you think it's right or not, just try it; it makes you feel a whole lot better. And to know that another part of you is living in someone else, that’s pretty cool, too.”

Andrew is forever grateful to Vicki. “I would not be where I am today without her help, that’s for sure,” he said. “And it’s a complete blessing. There are a lot of people that will never receive a kidney because you don’t have enough people in the world like Vicki.”

The two joke that they now share a love of hot and spicy chicken thanks to Vicki, a new favorite food of Andrew’s following the transplant.

Best friends Karen Crane, MA, and Crystal Villarreal, LVN, have worked together for more than seven years at Pediatrix affiliate Pediatric Ear, Nose & Throat Institute of South Texas in San Antonio. Years back, when Karen learned of Crystal’s battle with kidney disease and the eventual need for a transplant, Karen was quick to volunteer. That need came about sooner than anticipated. While Karen wasn’t a direct match for Crystal, they matched with another pair, which connected Crystal with a compatible donor. A month after Karen’s wedding in November 2020, where Crystal was by her side as a bridesmaid, Karen gave Crystal the ultimate Christmas gift—her kidney. Given the timing, Karen postponed her honeymoon to avoid potential COVID-19 exposure prior to surgery.

Their story captured the hearts of the San Antonio community and was widely covered by the local media. Ahead of the Dec. 4 surgery, Crystal told KENS 5, "There's just no way to describe it. There isn’t. And to be given a gift like that, it's priceless. It really is.”

Now four months post-transplant, Karen and Crystal have made a full recovery and are back to work. “I feel like I have energy for days,” said Crystal. “Just the energy level itself for me has been tremendous. I'm not sleeping 16 hours a day like I used to.” Karen touches on how the experience has strengthened their relationship. “It's definitely crazy—I didn’t think our friendship could get closer, but it definitely did.” And she’ll soon enjoy her long-awaited honeymoon in Mexico.

Learn more about why great people like Vicki, Karen and Crystal choose to work with Mednax: